Yes, The Co-founder of Apple Coded for Me

The co-founders of Apple were Steve Jobs and Steve Wozniak. Before that, Wozniak (Woz) was on summer vacation during 1970 and he and Allen Baum worked for Tenet, a mainframe computer startup. They did hardware diagnostics and test on the Time-Sharing operating system that Tenet had developed. I had written the Super Basic compiler. All Basic software before and since has been an interpreter. This meant that the source code had to be reprocessed each time it was run. With a compiler, the output was in machine language. Not only was it much faster but in our case, it could be re-used by all the other users on the computer.When I was hired by Tenet, I had just graduated from Stanford and was up to speed on Compiler Writing Compilers. This is what I suggested to the Tenet management. It turns out they did not want a regular Basic and just about fired me on the spot when I suggested it. They wanted subroutines, long names and double precision complex arithmetic, none of which were Basic standard. They also wanted every line typed in to be instantly executable.

After the hardware and software was more or less operational, Wozniak and Baum were hired to do diagnostics and testing. Wozniak had been working with computers since high school and was excellent at the testing. He wrote diagnostics for the computer and testing for the software.

Tenet built two computers, one for test and one delivered to the State of California Department of Transportation. Computer terminals were installed throughout the state and attached to the Tenet computer. It was used for 16 years before being replaced. During the 1970-1971 timeframe, there was a major recession and Tenet could not get additional funding. (You can tell it was a recession, Lockheed laid off 20,000 people on one weekend.) 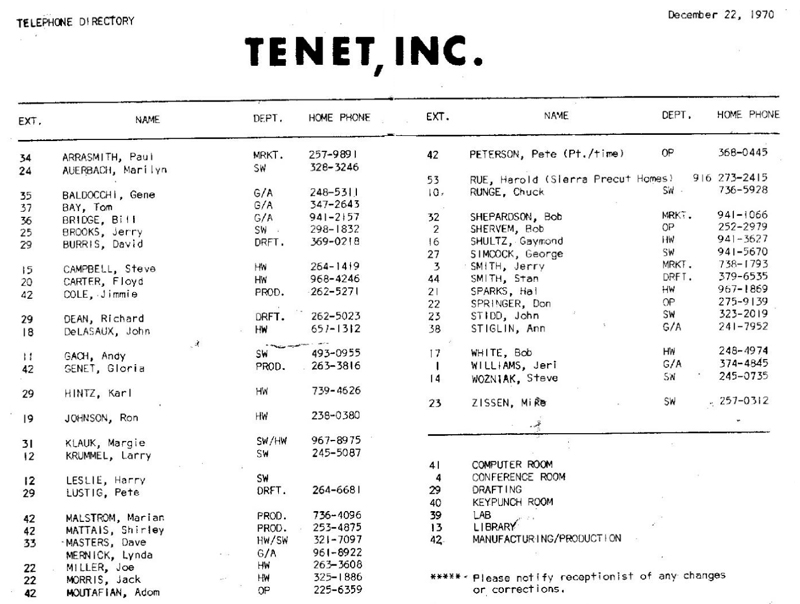